To assess and verify the quality of any type of ham you should conduct a tasting, so you can check the quality of ham in a safe manner. In conducting the tasting we must take into account four aspects: sight (visual), touch (texture), smell (aroma) and taste (flavor) of ham.

- Visual aspect: the slices of Serrano ham must have a colour between a reddish-purple and pale pink. These colours are owed to a muscular pigment called myoglobin (very low down in the pork), this pigment increases with the decreasing water content. In addition to this we must also bear in mind that on increasing the concentration of salt chemical changes take place, which produce a deep red colour during the curation period of the ham in the dryer. The slices of Serrano ham have a shiny appearance due to the fat that covers the surface of the slices. When the ham is at room temperature it displays a good deal of intramuscular fat, part of this in liquid state, and it is spread over the whole surface of the ham when it is cut, so you can see its characteristic sheen. The streakiness is also a symbol of quality that can be easily seen by cutting the ham, which due to the presence of fat that lies between the muscle bundles. The amount of streaks usually increases with age of the animal. 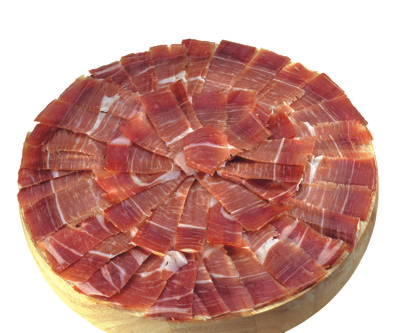 Plate of Serrano ham from Teruel, where we can see its characteristic red colour.

With regards to the fatty surface that covers the whole Serrano ham, it is usually yellow, although it can be of different intensisities according to the maturation period of the particular ham. The inner layers should be white or with a slight tone of yellow.

- Texture: on touching the slices of Serrano ham, we can notice them to be soft and slidy as a result of the fat. The texture of the ham is soft also because of the fat content. The ham is more or less as soft due to the hardness of the fat and its fluidity (if there is a greater concentration of lipids there is more fluid fat). Also, we need to bear in mind the lean texture, therefore we have to observe: the dryness (to see the degree of moisture in the ham), the stringiness (to determine the tendancy of the slice of ham to separate into strings, depending on the the intramuscular fat that it contains and the size of the fiber bundles), the juiciness (the moisture that the ham contains on chewing it), and the hardness (which has a lot to do with the stringiness and the infiltration of the fat, the ham should not have an excessive hardness but a certain degree of it to increase the chewing period and favour the secretion of salivary juices).

- Smell: Serrano ham should have an intense, pleasant and balanced aroma. To perceive the aroma of the ham we must unite the smell with the taste, nose and palate. Experts in this area call it the 'flavour'. And its classification takes place in the analysing of different elements: intensity, persistence, cured aroma and rancidity.
· Intensity; during the maturation odorous volatile substances are released, and as the process advances the aroma is made more pleasant and intense.
· Persistence; the long-lasting affect of the taste once the food has been swallowed.

· The cured aroma, that occurs through the use of natural nitrates and nitrites from the salt, for the preservation of Serrano ham.

· Rancidity should be considered positive up to a certain point, if it is present in excess it is said that the ham has passed curation.

- Taste: on talking about the taste of Serrano ham we must name the following flavours: salted, sweet and bitter. The salt content in the ham must not be high from a nutritional and sensory point of view, but neither should it be very low for the purpose of preservation.

The sweet taste of Serrano ham is owed to components such as amino acids and derivatives of sugar. In the curation period sugars are not added, but in the maturation, reactions occur that give place to elements which do contain small quantities of sweet flavouring.

With regards to the bitter taste, it has to be said that it is intimately tied to the sweet flavour. Many substances that create the sweet flavor in Serrano ham are the same as those that create the bitterness. We must have in mind that the bitter taste musn't be excessive, if so it would indicate a shorter time in the curing phase or the development of the ham at very low temperatures.