In the majority of cases the diseases that olive trees contract are caused by: fungi, bacteria and viruses. Fungi cannot produce their own sugars due to the absence of chlorophyll, as a result they survive as a parasite living off live plants or dead organic matter (such as olive leaves when they fall to the floor). Bacteria usually attack animals and humans more than plants. In agriculture they are very difficult to eradicate and in addition the antibiotics are very expensive, so the best thing to do is to protect the olive trees from the bacteria by covering up any cut or break in the trunk or the branches to prevent the bacteria from entering. The word virus means "poisonous juice", they are very small parasites and they attack especially grassy surfaces.

The main diseases that usually affect olive trees are:

- Peacock Spots: its technical name is Cycloconium oleaginym Cas, since this disease is caused by the fungus Cycloconium oleaginum. One of the most characteristic symptoms is the appearance of black, grey or dark circular spots on the surface of the leaf. Later these spots turn a yellowish colour and at the end of the spring the leaves fall from the tree. This defoliation, especially in the lower half of the olive tree, means that the tree is weakened and its production may diminish.
Farmers will usually use two treatments, one that they use at the end of summer or the beginning of autumn and the other at the end of the winter (we must ensure that the treatments are made prior to the heavy rains in early autumn). It is also recommendable that the olive tree is well aired and you try to reduce any condensation, by pruning the tree and making sure doesn't have too much foliage.

On these leaves the spots left by the fungus Cycloconium oleaginum can be seen.

- Verticillium Wilt: this disease usually occurs in overcrowded olive groves, it is rare in traditional olive groves. What happens is that the conducting vessels get clogged, so the secondary buds and branches of olive trees wither and sometimes in worst case scenarios even the primary ones. The leaves don't tend to fall off the tree, but they fold inwards and the branches die. The fungus is found on the soil and penetrates the root of the tree where it begins to develop directly.

There are some pests such as borer or drill that can be mistaken for this disease. (el barrenillo o el taladro) To prevent this disease we must try not to water the trees in abundance, try to locate the affected olive tree and uproot it completely, so that there is none of it left and don't fill in the hole until at least a year later, if not, longer.

-  Fruit Rot or Olive Anthracnose (Olive soap): the fungus characteristic of this disease (Deuteromycetes) acts against the olive, but also sometimes attacks the leaves, buds and wood. It is also known as leprosy, living or mummified. It usually develops in humid areas of southern and northeastern Spain, we lose up to 40% of the crop and it also affects the quality of olive oil. It shows two symptoms:

° rotting and mummified fruit, called olive soap here because of the foam that comes out of the olive due to the rotting. This symtom is the most characteristic of them both. The indications of the disease can be found in the green fruits, but its more common that they are seen further along the maturation process after they've changed colour, in black olives. The fruits rot and dehydrate, therefore they end up wrinkled.

° defoliation and drying out of branches, it only apprears in branches than hold a lot of affected olives. The leaves dry and wither, they fall from the tree and the braches dry out and the olive tree starts to weaken.

For its treatement it's recommendable to use products that contain copper. These treatments are preventative, when we see that one olive tree is damaged we must act then and there, and if it rains then repeat the process again.

- Olive Shield (Macrophoma dalmatica): this disease affects the olives. Dark circular spots appear, its form is similar to a shield (hence the name). It is not common, therefore have been few studies carried out for treatments of it, but it is recommended to do exactly the same as you would with soap olives (see above). It produces alterations in the olive oil, increasing its acidity, and sometimes strange flavours even emerge.

We can see the patch that forms on the olive.

- Tuberculosis or olive warts: produced by bacteria of the branch of the Eubacteria. This is introduced into the olive tree through a wound (caused by frost, hail, blows ...) therefore it's not advisable to use the shaking as a collection technique, as it causes many injuries (the best option is to use the vibrating machine or else do it manually). It is characterized by the appearance of tumors mainly small, pasty, smooth and greenish. Then they tend to tan, crack and wrinkle. These tumors may reach the size of a hazelnut. If the attack is very strong it can cause weakening and drying out of some branches. These olives produce low-quality olives, and often fall to the ground (because of the poor nutrition) and their oils tend to have strange tastes.

It must be said that once the tree is affected is very difficult and expensive to cure. But you can follow some tips on how to prune olive trees affected by the disease, so that the bacteria does not reach the healthy olive trees, plus all the tools that you use for pruning the affected tree should be disinfected with solutions of iron sulfate.

- Crown tumors or galls: This disease is caused by the bacterium Agrobacterium tumefaciens. It usually affects more the younger olive trees. The symptoms that indicate the disease are the appearance of lumps or 'tumors' on the part where the stem branches from the roots. This prevents the correct circulation of the sap and the tree dies as a result although it usually takes two or three years. You have to try to make sure that the olive tree does not become injured as this disease is caught through injuries; the bacteria which attacks the olive tree enters through cuts or exposures to the air. The treatments used are not hugely effective, so the best thing to do against this bacteria is to prevent it by ensuring that the olive trees are in top condition. In the event that a tree gets infected, it must be annihilated so as to protect the others. 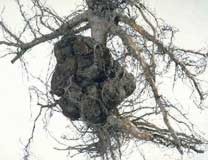 The olive tree died two or three years after from being infected by the bacteria Agrobacterium tumefaciens.

- Olive Berry Rot (Pseudocercospora cladosporioides): we can say that an olive tree has the disease if irregularly shaped patches of brown and yellow appear. It's a little-known disease that can be confused with Peacock spots. But in this case on the underside of the leaf you can see grey with a silver tone. Treatments for these bacteria are the same used against Peacock spots.

- Sooty Mould (Capnodium elaeophilum): for this disease to appear in the tree a sugary substance called 'honeydew' that comes from aphids, mealybugs or whiteflies has to be left on the tree, in which the fungus negrilla or mangla lands. We can also see a sooty mould covering the leaves and the fruit, hampering photosynthesis in the leaves. Treatment often focuses on deterring the settlement of the insects named above, so that the sugary substance doesn't appear.

The first and foremost in these diseases is prevention rather than treatment. We must also bear in mind that all these diseases may have affected the quality of the olive oil that is made subsequently, reducing their quality.