The next step in the making of extra virgin olive oil after the milling or grinding of the olives is to press the resulting pastes. The place where the pressing task is carried out is the mill, a term derived from the arabic word "al-masara" meaning "the place where the oil is extracted". Among the presses used throughout history can be categorised into two different types: the presses of direct pressure or presses of lever pressure.

The following is a list of the different presses with information about them which can be expanded on by clicking on the link or the picture. 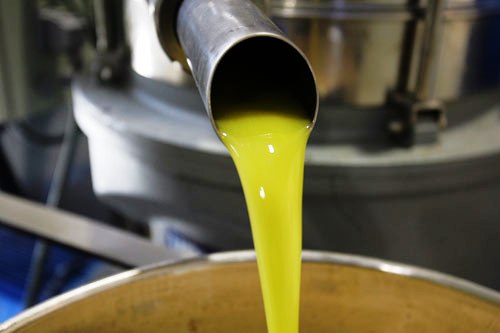 This press is formed, as its name suggests, by a stone tower that ascends and descends with the help of a screw or a spindle made out of wood. The objective of this system is to press the olive paste by dropping a stone (through a system of levers) on another, on top of which lie the olives.

This system has been known since the time of the ancient Greeks through a bas-relief (projecting image that stands out against the background) depicting three satyrs driving a wooden lever intended to push a stone in to a basket of grapes or olives. This press was widespread, especially in the Andalusian region due to its low cost and its compactness unlike other presses which are explained below.

This system originated in the Old Age, although at a later date than the appearance of the Tower Press. The first testimony that we have of this press is a Roman painting that dates back to the seventh centruy BC. The mechanism of the Wedge Press is composed of a structure of two columns of wood joined at the bottom and top by two fixed timbers. On the inside of the columns there are two longitudinal grooves into which are inserted three mobile horizontal slats. The olive paste is put into sacks and placed at the bottom. In each cross bar or sleeper, three wooden wedges are fitted (in the opposite direction) and driven by hammers operated by two men, one on each side of the press. At present this type of press is still in use in places like the Maghreb. 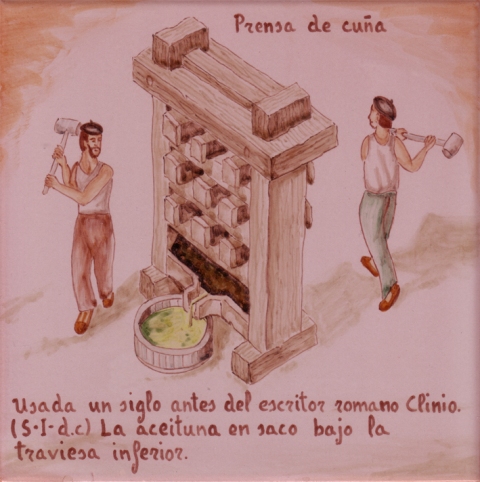 Its origin is set at dates before 500 BC C. when it was first mentioned in the work "Naturalis Historia " by Pliny. And this author considered this old press as the zenith of a technological revolution. The work conducted by press was similar to that of the previous presses, however, it was smaller and therefore saved space. The press was composed of a large screw known as "malus" that went through a table situated at the top and was fixed at both ends. The table would fall vertically against the base on to a wooden board called "tympana" pressing the olive paste. 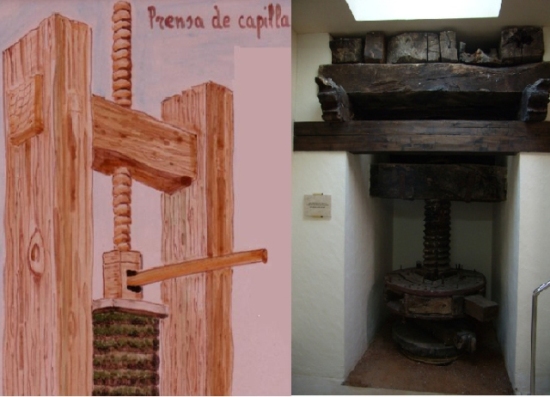 This system is attested in the area of Greece and in the sixth century BC. through an iconographic representation in a glass ceramic called "skyphos" where two men appear driving this type of press. One of them sets large stones on the edge of a wooden beam which is located above an olive basket. While the other individual  hangs from the beam to heighten the pressure exerted on to the baskets. Under the baskets lies a tube that transports the juice from the olives to a recipient. 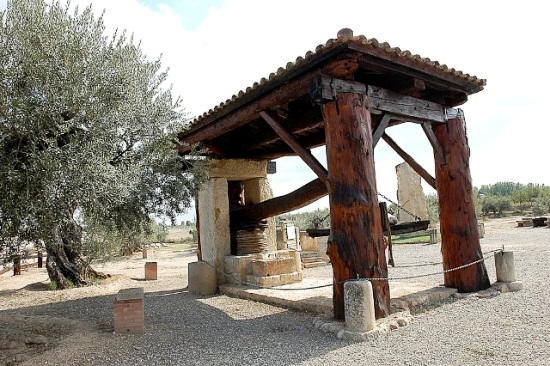 Cato is the first ancient source that describes a mechanism similar to the lever and lathe press , but was Vitruvius in the first century AD. who gave a detailed description of the press. In this case thepressing is done by manual force exerted by a lathe. 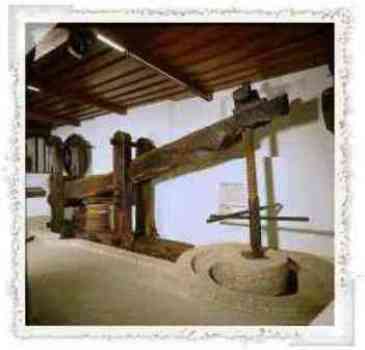 This press to produce olive oil is an evolution of the previous one, in this case the lathe disappears and it is replaced by a spindle. This evolution took place leading up to the first century BC. Thepressing of the olive paste was carried out as the spindle was rotating; in order to raise the press it was enough just to turn the screw to the opposite side. 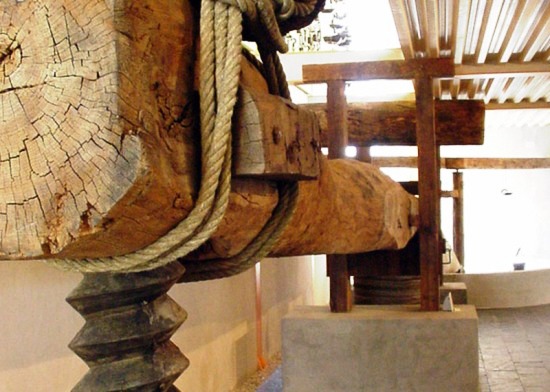 The sources attest that this machine was invented in Plato's time. However, the mechanism evolved over the centuries and it was the Muslims who made the most important changes. The end result wasa machine larger than that of ancient times and with more power. The most characteristic feature of this press was that it included at the base of stone spindle a pedestal or quintal exerted by counterweight. 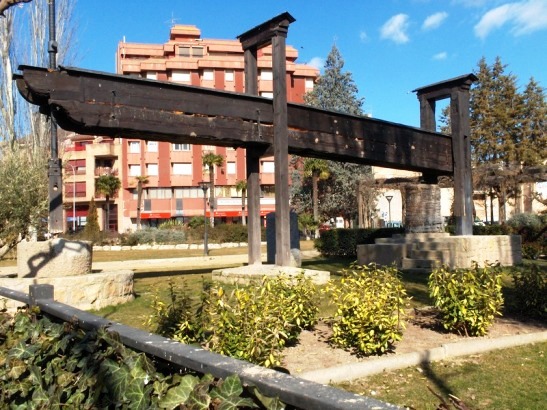 Beam and Quintal Press operated by the lever system

The same as the water mill, this system uses the power of water to put pressure on the pulp of olives and extract oil from them. 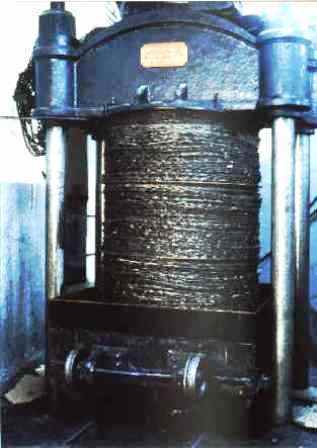