Both olive oil and olive trees are elements that possess great significance in the Christian religion. The olive tree is a symbol of peace and reconciliation in its identification with the dove who returned to the ark with a olive branch in its beak after the huge flood, signifying God's reconciliation with man.  Likewise, when Jesus of Nazareth entered Jerusalem, the Jewish people recieved him with olive branches. This is a tradition that has continued up until today and is remembered every Palm Sunday when the people attend the church to bless their olive branches. Previously they also used to hand olive branches from their balconies or from the headboards of their beds, as a religious symbol.

The death of Jesus Christ and the drama of Calvary are also related to the olive tree given that he was taken prisoner while he was praying in the Garden of Olives, called Gethsemani in hebrew, which means "olive press".  This place is known by Catholicism as a place of redemption, when Jesus understood that God was by his side and accepted his passion inside him.  In Christianity the olive tree is also identified with the victory or triumph of life over death, this is why the early Christians would decorate their tombs with olive branches.

The Garden of Olives is one of the scenes in the beginning of the Passion of Christ.

Olive oil is one of the four most important symbols in Christianity along with bread, wine and water. The relation of olive oil to Christianity was established with the origins of the religion as shown in the book of Exodus:

Moreover, the LORD spoke to Moses, saying, "Take also for yourself the finest of spices: of flowing myrrh five hundred shekels, and of fragrant cinnamon half as much, two hundred and fifty, and of fragrant cane two hundred and fifty, and of cassia five hundred, according to the shekel of the sanctuary, and of olive oil a hin. "You shall make of these a holy anointing oil, a perfume mixture, the work of a perfumer; it shall be a holy anointing oil [...] You shall anoint Aaron and his sons, and consecrate them, that they may minister as priests to Me. "You shall speak to the sons of Israel, saying, 'This shall be a holy anointing oil to Me throughout your generations. It shall not be poured on anyone's body, nor shall you make any like it in the same proportions; it is holy, and it shall be holy to you. Whoever shall mix any like it or whoever puts any of it on a layman shall be cut off from his people.' (Exodus, 30: 22-33).

Therefore olive oil served to anoint priests, providing them with authority, glory and responsibility, acting on behalf of God and the Holy Spirit. The honour of being annointed also was given to kings and monarchs as it confirmed their power and strength from God. David, the second of the monarchs of Israel was anointed as king by the prophet Samuel, as the bible tells us (Sam.16:13).  This tradition, to anoint monarchs, was resumed in the medieval age by  French kings, who called the ceremony “consagración” (consecration). The sacred olive oil was stored in the "Sacred Ampoule" which had been brought by an angel during the baptism of King Clovis by St. Remy and was kept in Reims cathedral. 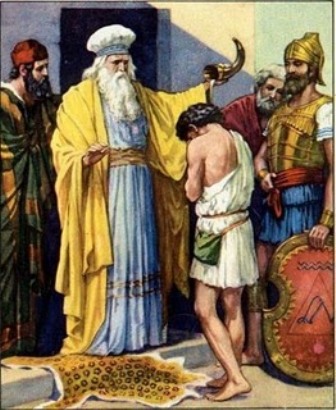 Anointing of King David by the prophet Samuel with sacred olive oil.

Nevertheless, the tradition of anointment and the use of olive oil in religious rituals come from Paganism and actually predates Christianity. The priests in Egypt used to anoint the representation statue of God to cleanse and purify it. Also, in Greek and Roman religion they use olive oil in their sacrifices and offerings to the Gods.

Equally, olive oil signified the curing of diseases. This use of sacred oil as a sanitary element was found in the age of the Christian Catacombs.  This oil was burnt in tombs and was considered as a relic by the pilgrims who on arriving would collect it in small ampoules. Testimony of this can be found as a collection of these small silver bottles which are kept in the Monza Cathedral in Italy, brought from the Orient to present to queen Teodolinda at the end of VI century A.D. that contained the oil of the holy martyrs. 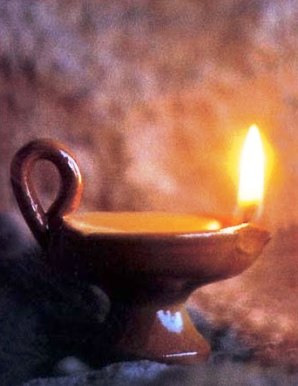 Lamp where olive oil was burnt to maintain the flame alight.

In popular medicine its habitual to find examples of how the people carried out curing rituals with olive oil from the sacred lamps in the churches. One known example is the case of Michael Pellicer (XVII century) protagonist of the "Miracle of Calanda", who after having his leg amputated, went to the Temple of Pilar in Zaragoza everyday and proceeded to anoint the stump of his leg with olive oil from the sacred lamps to ease the pain. As legend has it, after having spent almost two years in Zaragoza, the young man returned to Calanda, where he was on the night of the 29th of March 1640 when the Virgin Pilar restored his leg. Whether the miracle be true or not, this tale demonstrates how widespread the popular belief of the healing properties that olive oil had was. 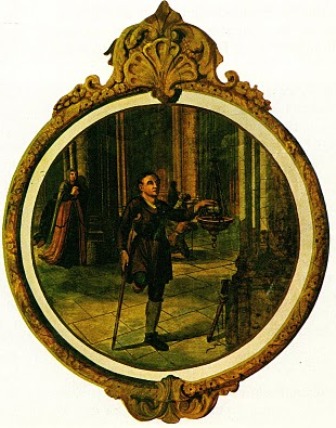 Representation of Michael Pellicer taking olive oil from the sacred lamps to ease his pain.

Olive oil has been very present in the sacraments and the Christian service since the origins of this religion until today. Three different types of sacred oils are prepared with olive oil: the oil of the sick, the oil of the catechumens and the holy chrism (myrrh). As stated in the Bible, only virgin olive oil was the appropriate material to prepare the sacred ointment.

The first of the blessed oils, the oil of the sick, is destined to the sacrement of anointing the sick or Extreme Unction. One of the first references of the Bible to the use of oil on the sick appears in the New Testament in book of the Epistle James:  Is anyone among you sick? Let them call the elders of the church to pray over them and anoint them with oil in the name of the Lord (James 5:14). In this sacremente, olive oil is understood to be medicine that will comfort and strengthen the sick. Ultimately it symbolizes the final healing that will come with the resurrection. 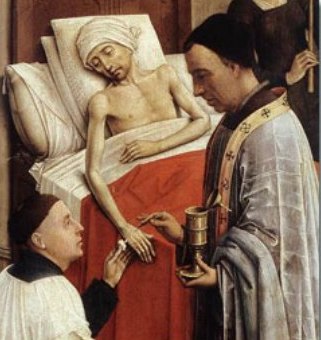 One of the three types of sacred oils is designed to administer the anointing of the sick.

The oil of the catechumens is designed for the acts of exorcism that try to keep bad and sin away. It is used in the ordination for divine service and the consecration of the monarch. It also prepares those who will be baptized in the rite, exorcising them of sin and preparing them to be reborn in the love of Christ.

The Holy Chrism is an oil mixed with balm or scent as a symbolic fragrance to facilitate its distinction from the other oils. This olive oil is designed for the sacrement of Corfirmation, the bishop draws a cross with the oil on the forehead symbolizing the gift of the Christian Holy Spirit. The Holy Chrism is also used for the the ordination and consecration of priests and bishops; with the priests they anoint their hands and with bishops they anoint their head. Baptism another of the sacraments in which the holy oil of Holy Chrism is present, after bathing the head, the crown of the person baptized is anointed with olive oil. Holy Chrism is also used in the consecration of symbolic objects such as the chalice and paten. 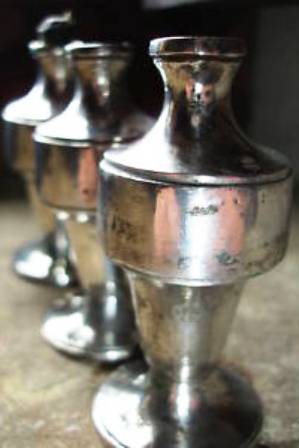 The holy oils to be blessed on Holy Thursday.

On some occasions a combination of sacred oils are used.  This is what happens in the sacrament of baptism as explained above. The Holy Chrism is also used with the sacred oil for the sick for blessing new bells. In these cases the Holy Chrism is spread over the outside of the bell, while the inside of the bell is anointed with the oil for the sick.

The holy oils are blessed every year on Holy Thursday in celebration of the named "Chrism mass".  This is a important day for Catholicism as not only do they bless the sacred oils, but also because the priestly vows are renewed. The mass is held in each diocese (districts under the supervision of a bishop, which are then divided into parishes). In St. Peter's Basilica in the Vatican the Pope celebrates the Holy Chrism Mass, in which the Supreme Pontiff of the Catholic Church blesses the holy oils. For sed celebration, the olive oil that is blessed comes from Aragón, Spain, where we are in fact based. Our company forwards a hundred litres of extra virgin olive oil called "Sursum oil" annually. 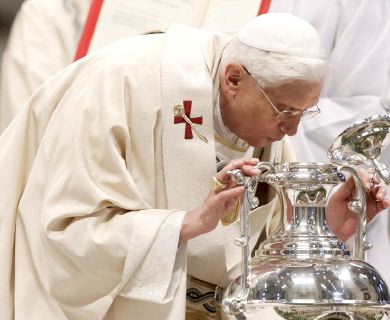 The Holy Father blesses the holy oils in the St. Peter's Basilica during the "Chrism Mass".

The Holy Chrism must be consecrated, that is, make it sacred. On the other hand, the oil of the sick and the oil of catechumens should only be blessed, a term that comes from the Latin bene dicereliterally meaning "speak well " which could be understood as praise. Those in charge of consecrating the chrism are the bishops of each diocese, only in special cases could it be a priest.Subsequently the oil is distributed to each parish and the holders of each parish are in charge of guarding the sacred oils and administering the sacraments appropriately.

These oils must be renewed each year, in the case that they have not been finished, they can be used to burn oil lamps in the church. Lighting is another function that the Bible and Christianity gave the olive oil. In Leviticus (24:2-4) it explains: The Lord said to Moses: “Command the Israelites to bring you clear oil of pressed olives for the light so that the lamps may be kept burning continually. Outside the curtain that shields the ark of the covenant law in the tent of meeting, Aaron is to tend the lamps before the LORD from evening till morning, continually. This is to be a lasting ordinance for the generations to come. The lamps on the pure gold lampstand before the LORD must be tended continually. The olive oil lamps symbolize the light in the world to guide the Christians in a world of shadows.