The first step in the production of extra virgin olive oil is to harvest the olive fruits, take off the leaves and wash them. After that, they must prepare the olive pastes to later extract the juice through the presses. The pastes are obtained by a milling or grinding process that breaks the olive, releasing the oil from the tissues.  The task is accomplished throughmultiple systems. The most common method is the mill, however, since ancient times, additional more obscure systems were used such as twisting or being stepped on . Below arethe procedures used to prepare paste. From each of them can be obtained more information, just click on the link or the picture.

This procedure consists in introducing the olives into a sturdy cloth bag, and exert a twisting force, wringing the bag with the use of wooden handles applied at the ends. This systemwas found in ancient Egypt around 2600 BC.

The treading system is very old, dating back to the twentieth century  BC. when it was used in Egyptian society. It is a procedure in which two elements come into play: A carvedwooden bowl measuring approximately three feet long and two feet wide, and a bag made with natural elements of about two meters in length. The system was to fill the bag with olives and tread repeatedly with special footwear called "esparteñas"  or directly with bare feet. To work more firmly, the workers could stand on a rope hanging from the ceiling.When this stage had finished, about three litres of hot water was poured into the bag and the process was repeated.   Finally, a fluid consisting essentially in oil and water was passed through the bag and drained off the side of the wooden surface into a container as shown in the picture below. 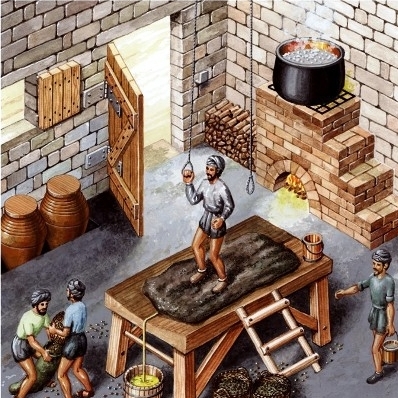 Procedure developed for the fifth and fourth centuries BC. especially in the eastern Mediterranean. It is based on the use of heavy stone cylinders measuring two meters in length andtwo feet in diameter. These cylinders were rolled down, with the help of wooden levers, on rectangular tanks sizes of about fifty centimeters in depth where the olives were deposited.The resulting liquid would trickle through openings in the base of tank.

Remains of this system of obtaining virgin olive oil have been found in North Africa. It consisted in crushing the olives through brass bludgeons. Some researchers have suggested thatthis system can be identified with that described by the author of the first century AD Columella in his book "De Re Rustica" in which he calls the process "Tudicula. " 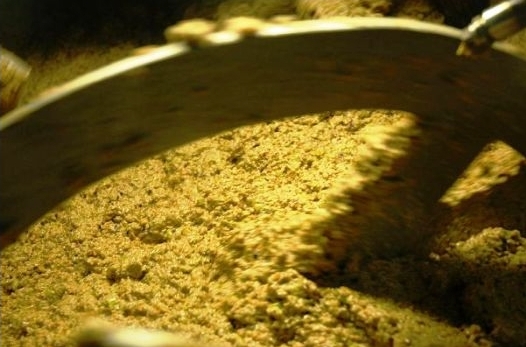 This system has its origins in ancient Greece and then spread to the Italian peninsula and the Roman colonies. Through Cato and his work "De Agricultura" second century  BC. comesthe first written description of "trapetum. " This author claimed it was an ideal tool with which to grind the olives in order to make sure that the olive stones would not break andcontaminate the oil obtained. The remaining testimony on the "trapetum" come to us through archaeological sources, such as the remains found at Pompeii from the first century BC C.and also in Provence and North Africa. 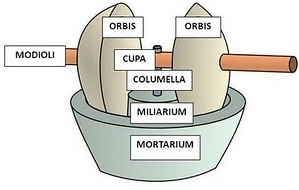 Broadly speaking, the "trapetum" consisted of a basement in the form of a mortar made of stone called "mortarium", by a stone column or "Milliarium" in the middle which allowspivotal movement, and pulping two molars  or "orbis" held by the central column, which are flat on the inside and convex on the sides and for carrying out pivotal movementes of rotation and rendering. The whole structure was fixed by iron plates and pins. The stones were separated by a piece of iron known as "relief" that provided support for them and prevented them from stopping at the bottom and breaking the stones of the olives. Thus, through friction, separating the fleshy part of the olive from the stone. 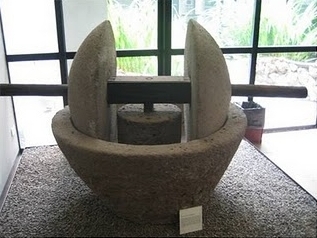 Use of this system came after the previous system (post-trapetum), more specifically it dates back to the first century BC. and it was the author Columella who gave it its first mention.However, its use, primarily in the Mediterranean, has lasted over the centuries up until even today. The objective of mola was similar to "trapetum"; for grinding the olives withoutcrushing the stones and contaminating them. This tool consisted of a circular base flat or tilted toward the center with a diameter ranging between 1.40 meters and 2.10 meters. Inthe centre of the base there was a circular or square hole of variable depth in which they inserted a vertical axis. To this vertical axis was fixed a horizontal wooden pole with wentthrough the wheel. The cylindrical part or wheel was rotated by human power in earlier times, being replaced by animal power in more recent times. 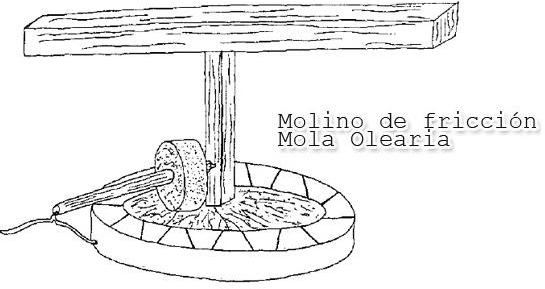 This mechanism is a product of the technical evolution of the above systems. It consisted of a circular stone base of over two meters in diameter and about half a meter high above the ground. The prop sits on the base. From the centre of the prop, ascends a central axis

, usually made of wood or iron, that fits

into a beam supported by the walls of the enclosure.The grinding was done thanks to the wheel that rolled on the floor. This model changed according to whether the mill wheel was vertical or tapered. 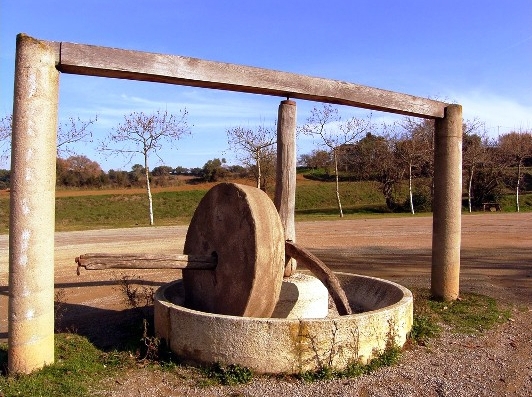 This mill is an adaptation of the former and had begun to be used in the Iberian Peninsula by the eighteenth century. This is the traditional model mill in our country. It was composed of a big circular stone (prop) on top of which rotated the rollers, made out of stone in the form of cones.

An innovation in this mill was the introduction of a chute located at the centrewhere the olives were introduced. The number of rollers varied from one to four depending on the production volume that needed to be met. 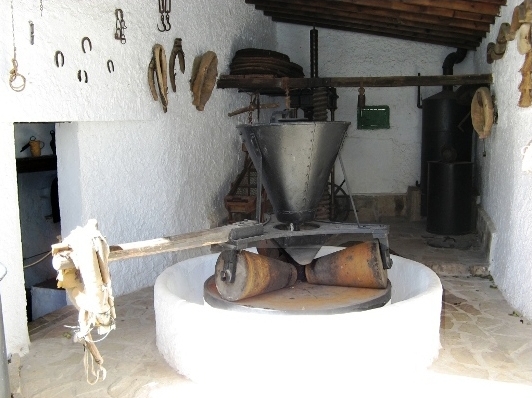 Mill with three metal rollers from the late nineteenth century

The water mill is the most recent of those listed as its use came later than the seventeenth century. The water mill had already been used for grinding grain and to test its effectiveness it was applied to the olive. This production system used the motion of the water to turn the wheels that ground the olives, producing the pastes that later would be pressed in order to obtain the extra virgin olive oil.  With the arrival of the nineteenth century the hydraulic force was replaced by the newborn electric froce which made the manufacturing process of olive oil more mechanic which up until then, as has been observed throughout the text, had always been more artisan and manual. 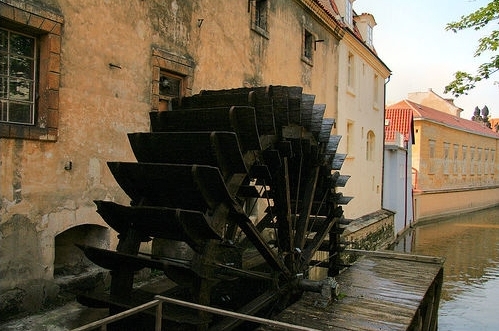