The olive as well as being used for the production of olive oil can also be consumed as table olives. And there are certain varieties that are more suitable for one use or the other. For consumption as a table olive, the most popular varieties are the following: manzanilla, hojiblanca, gordal, arbequína or empeltre. This last variety  of olive is the one most consumed in Lower Aragón. According to data offered by A. González Vera, member of the Aragonese Academy of Gastronomy, Aragón produces sixty thousand tonnes of olives every year, of which, only 15% end up being used as table olives while the rest of them are used for the production of olive oil. 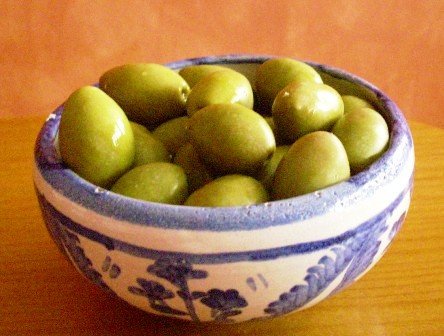 Olives were a food of great importance in the diets of our ancestors. Traditionally they were consumed as a compliment to mid-morning or mid-afternoon snacks  in the country or at home; it was customary to eat black olives with bread. Today olives are used in aperetifs, in salads and a variety of other dishes.

Olives intended for consumtion are harvested in the autumn, whereas the olives used in the production of olive oil are harvested from the month of December. So that the olives are edible they need to lose their bitterness to be pleasing to the palate therefore they are subjected to a process of curing and salting or sweeting and flavouring. This process is carried out in a number of different ways following different traditions depending on the area or family. It also relies on the level of maturity of the olive, depending on whether the olive is immature (green) or mature (black), the process will be carried out in one way or another.

Writings found even in ancient times reflect the tradition of preparing olives intended for direct consumption. The Greeks seasoned olives with honey and a splash of vinager as they enjoyed the sweet taste; also they accompanied them with fennel, rue, celery and bay leaves. Whereas in Rome, the hispanic latin author Columela (first century) described a recipe for olives harvested in the autumn in which they crushed the olives and then washed them in hot water. Afterwards they gave them flavour by submerging them in brine with fennel, grape juice and mastic leaves.

Paladio and Catón are other ancient latin authors who spoke about agriculture in their works and included recipes for serving olives. 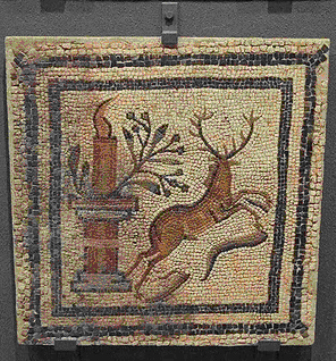 As mentioned above, there are hundreds of recipes that exist for dressing olives and preparing them for consumption. Below are two of the most commonly used recipes for table olives in Aragón.

1. First you must pre-wash the fruit to remove dirt and dust or leaves that may be brought in after harvesting in the field.

2.  The second step is to split and crack the olives with a wooden instrument, a flat stone or a knife. You need not break the stone in the middle. If you want to, you can skip this step and leave the olives whole.

3.  The third step is to put the olives in brine which conserves them for months. The mixture is composed as follows:

For every litre of water add 90 grams of coarse salt. Mix the water and the salt together in a jar or a bottle. You can also use glazed bowl, glazed earthenware, a plastic or a glass recipient however using a bottle or jar means that you can close it and shake it which will help the salt to dissolve better. If you don't use a bottle or a jar, make sure you stir the mix well and use a wooden implement, never your hands.

Previously, to know the appropriate amount of salt to use, they put in to the mixture a fresh egg with the shell. They added salt and stirred with a wooden spoon so that it would dissolve until the egg started to float and the end of the egg emerged and a part roughly the size of a coin could be seen above the water. This meant that the mixture ready; then they removed the egg.

4. The fourth step is to get rid of the bitterness of the olives. This proceedure is called desamargado ('debittered'). The olives are put in hot water and the water is changed every 12 hours. This process takes place over varoius days; the number of days depends on the consumer's taste, until they reach the bitterness or sweetness wanted. For split olives the recommended time is from 1 to 8 days; whereas for whole olives, from 4 to 8 days. 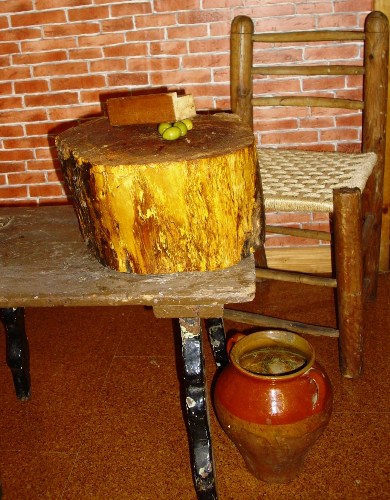 Utensils for the artisan preparation of table olives split or "flattened". To the right is a mud "Parreta" where the olives were deposited.

5.  The fifth step is to dress or marinade the olives. The olives are kept in glass jars of whatever size desired. You can reuse glass jam jars that you get from the supermarket. Its recommended that the size of the recipient isn't too big because if there happen to be some olives that go off they will contaminate the whole jar, therefore the smaller the jars, fewer the olives are spoiled. There are many ingredients for the marinade. One recipe for the whole olives is to put two slices of lemon and two cloves of garlic to each litre of water, also herbs such as fennel. For the split olives, you can put them with herbs only such as fennel, thyme, rosemary, laurel... When you introduce the food into the recipient it is advised to put half the ingredients (aromatic herbs, garlic, lemon etc.) at the bottom, then fill the jar full of the olives and cover them with the other half of the ingredients by putting them on top. Lastly, fill the jar with water and a few drops of extra virgin olive oil to help to form a layer on top so that the oxygen doesn't penetrate the mixture and spoil the olives; the same is necessary so that the olives don't rise above the water because if they did, they would perish.

6.  The last stage is the consumption. Before this, you need to wait for approximately one week for the split olives and one month for the whole olives. These periods of time, of course, can vary so therefore it is advisable to check them regularly. 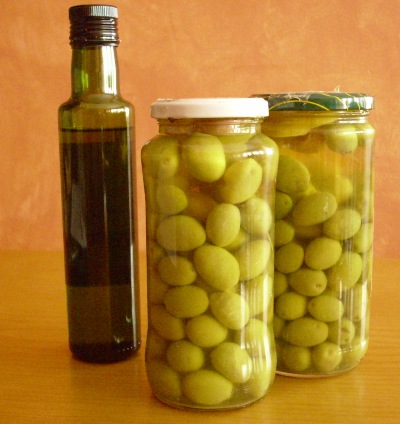 This is a recipe well known in Lower Aragón. These olives must be consumed when they are mature or in other words, black. To "kill them" its necessary to freeze them, put them on the grill or roast them.

One way to do this is to pick the olives from the tree after a night of frost when they have been frozen. Also, after being picked, they can be left outside for a couple of frosty nights. Another proceedure is to roast them in a frying pan or wrapped in aluminium foil on the barbecue. when the olive is dead its skin goes wrinkly and it loses a good deal of its bitterness.

Next, they are washed and dressed with chopped onion and vinager, with extra virgin olive oil, with lemon or also sprinkled with dry salt.