Olive oil is always known for its moisturizer , regenerater and softener properties, Already in the first century of our era, olive oil was used as a medicinal ointment. Phoenicians, Carthaginians and Greeks considered the fruit of the olive tree like "Revitalizing panacea" , which was used both in food as a therapeutic  or beautifies applications. It has anti-oxide virtues that help combat the skin's aging.

Countless other products that can be done from the base of virgin olive oil, whether ecological or not : soaps, moisturizers,  massages oil….Soaps made of  olive oil are a very old tradition in  Spain, its development is part of the conventional wisdom albeit with little variations:

How to make soap of extra virgin olive oil:

1- It takes a kilogram of caustic soda and dissolves in six liters of water in a container that isn`t make of tin or aluminum.

2- Where has finished disposing,we will gradually incorporating six liters of oil, previously strained, while spun around with a stick.

3- We must remove always in the same direction, then will be solidifying, like  homemade mayonnaise. We know that the soap is ready when the stick draw cleanly, without traces of pasta attached to him. This process can be accelerated if we put the  boiler at fire. The soap so obtained will be of higher quality. 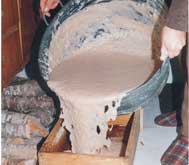 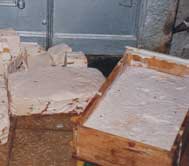 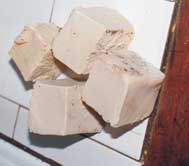 Three phases of the manufacture of homemade soap.

Then transfer soap in a container and let it harden one or two days. After this time we cut soap as the size you want ,after leave it to air itself a few hours. On this basic rule, there are variations depending on the area of Spain such as adding a handful of salt,or flour, or a few drops of indigo to give a blue color.

A good soap is characterized by a saponification perfect, it has not leave residue in the water or substances without dissolving. It must be a firm paste, oily to the touch and homogeneous.

The key is the raw material used, the juice from the olive must be cold-pressed and bottled at the time of collection, only thus ensuring the purity of the properties of olives.

The natural soaps poise the acid mantle's skin and help to alleviate the allergic problems. They have natural and pure smells because they contain essential oils . The possible variations are innumerable  adding essential oils, all natural products, with the benefit that it poses to the body; including it the exfoliating, relaxing, therapeutic or hydrating benefits. 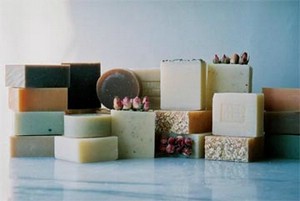 The extra virgin olive oil  helps to delay  the appearance of aging.