The pig has been an important factor in the domestic economy of many families, living in the towns of Aragon, for centuries. People from Teruel have maintained for many years the tradition of making sausages that are obtained from pork, such as chorizos and longanizas with natural casings, lean pork or hog, pork fat and spices of the various types and in different quantities according to the tastes of each family. Some of the sausages like longaniza and chorizo are products that can be consumed fresh after cooking, semi-dried or totally cured according to your taste.

Longaniza and chorizo from Aragón is one of the most traditional sausages of traditional aragonese cuisine and this delicious sausage also has a day dedicated to it called "Jueves Lardero"  or "Choricer" (the Thursday before lent) which is the Thursday on which the carnival begins as the saying goes: "Jueves Lardero, longaniza en el puchero" ("Thursday before lent, sausage in the pot") and the tradition is that Aragonese families spend the day in the field where the main thing is to go with a sausage sandwich and the county of Lower Aragón, a chorizo sandwich, hence the name of the day "Choricer"; although some people choose to eat the sausage in a tortilla or a cured sausage sandwich. The chorizo is cooked on a grill or, if possible, on a fire.

Aragonese longaniza is a sausage that, since its birth, its fabrication process practically hasn't been modified, therefore all of the butchers have their own artisan family recipe, that they have used for years and years. Although there are some variations regarding the different spices and the quantity of spices used, the basic method for making longaniza in Aragón is always the same, the meat used is pork belly and lean pork; the only essential requirement for the making of Aragonese longaniza is to use the high quality meat that comes from the Teruel pigs which are fattened with natural feeds.

Aragonese longaniza, made in keeping with the traditional methods, has the special flavour that homemade sausages possess; as determined by the quality of meat used in its fabrication, in fact it was the first product to have a regulation of use with the Food Quality seal. Its development, broadly speaking, is simple. It consists first of all in mincing the meat and mixing it with the spices, which should be finely chopped. Then it is kneaded and dried anise, which is also called "cazalla", is added to the mixture which gives Aragonese sausages its special flavor. The process is finished by encasing the meat in the pig's intestine and tying it off with a cotton string. 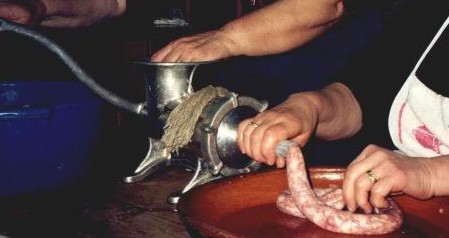 Hand operated machines were often used in the making of homemade sausages.

One of the recipes for homemade Aragonese longaniza that has been handed down through the years uses for each kilo of meat the following ingredients: 800 g. of lean pork, 200 g. pork belly, 18 g. of salt, 1 g. of cinnamon, cooked fruit to taste, a glass of dry anise and 3 g. of white pepper. It's important that the meat used to make the longaniza comes from two different cuts; one being leaner, which is used for 70% of the mixture and is usually taken from the top of the front leg, while the other is a cut that contains more fat, which is usually the belly and the maximum percentage of its use in the mixture is 30%. The beginning of the process starts with the preparation of the meat; taking off the skin that would otherwise lessen the quality of the longaniza; once the cuts of meat are prepared, the meat is minced, mincing the pieces of lean meat mixed with the fattier cuts of pork belly, so that the mixture is more compact.

The process continues with the kneading of the meats to which we add all types of spices, creating an even mixture that binds together all of the ingredients; this mixture is placed in a recipient, compacted and well covered with cling film or cotton cloths, leaving it to rest for a few hours at a temperature of about 4ºC.  At this point, it is now the moment to put the intestines, with which we are going to encase the longaniza, in tepid water to soak, given that the intestines are usually sold in brine and therefore we need to desalt them. After the standing time of the sausage mixture, we can start to encase the longaniza sausage, which is done by placing the meat in an 'embutidora' pushing firmly and continuously to avoid the formation of bags of air (if you don't have an 'embutidora' to hand, you can use an funnel) moisten the mouth of the funnel, place the intestine around it and begin passing the mixture through the mouth of the funnel or the 'embutidora', filling the intestine with the meat mixture.

Once you have filled the intestines you need to tie the longanizas, whose technique consists in making a knot at the end of the longaniza followed by two transverse knots; then at a distance of between 20 cm and 70 cm two pieces of string are tied, separated by 4 cm, which constitute the end of one longaniza and the beginning of another, therefore a cut must be made between them and then top off the ends with another two transverse knots. Now with the longaniza encased and tied off the casing is punctured all along the length of the longaniza with an awl or a needle to remove any air pockets that have emerged during the encasing of the meat.

Lastly, the cords of strings are tied together with a pair of knots so that the longaniza can be hung to dry, which must take place in a cool place with good ventilation.  If you take in to account the conditions under which sausages were dried formerly, you must reproduce conditions of the attic rooms which were found at the top of the houses as it was the most fresh and airy part with windows that allowed the entrance of the northern wind. The longaniza, chorizos, sausages and other pork products were hung from long, clean wooden beans that were attached to the ceiling, keeping them separated enough to avoid rubbing and to ensure an even drying.  Aragonese longaniza can be dried and eaten as a dried sausage or it can also be conserved in olive oil in a dry place; longaniza can also be dried slightly and then cooked on a grill, fried, cooked in a stew with other ingredients or it can be conserved after being fried in a mixture of olive oil and lard.

Elaboration of Aragonese longaniza. Video made in the Science and Technology of Food department

in the Veterinary University of Zaragoza, by Guillermo Alcusón and Alberto Lorés.

Chorizo is a typical Spanish sausage cured by smoke or air, made with minced meat marinated in spices, of which the most popular is paprika, which gives it a red colour.  Formerly the sausages, such as longaniza and chorizo, were made in the winter, as the cold weather helped the salting stage of Spanish ham and the drying of the sausages. However, nowadays, technology allows the curing to take place in whichever season of the year and they allow a longer conservation period due to the use of freezers and vacuum packs etc; techniques that reduce the use of ash and olive oil as conservatives.

Homemade Spanish chorizo is normally made with the same ingredients in all provinces with the only difference being in the blend of spices used, which can vary from region to region, the main ingredients of chorizo for each kilo of meat are: 1 kilo of lean pork, 400 grams of pancetta or pig fat, 13 grams of salt, garlic to taste, 1.5 grams of cayenne pepper and 21 grams of paprika. In the chorizo elaboration process at an industrial level other ingredients are added: nitrites and nitrates to give it its red colour and avoid botulism, ascorbic acid is added to accelerate colouration and to prevent the fat from oxidizing and maturation regulators are added as sweetners to promote the maturation of the chorizo. Chorizo can be encased in a wide intestine (chorizo cular) or in a narrow intestine, sometimes its form is straight (chorizo de vela) and other times it can be encased in the form of a horseshoe (chorizo sarta), the latter being the most popular form used in Aragón. 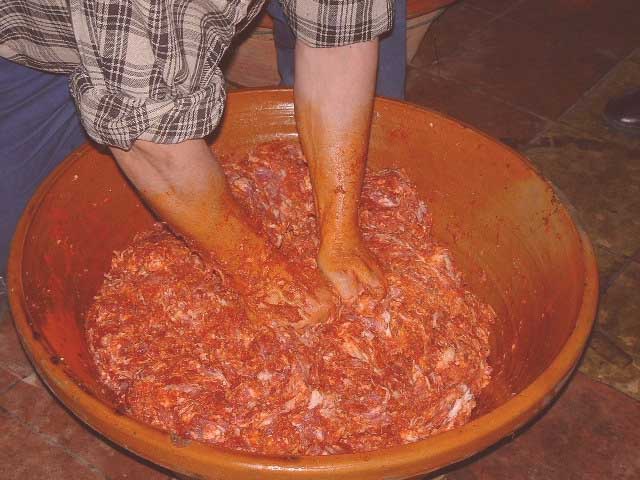 The sausage meat should be thoroughly mixed and left to stand for 24 hours before it is encased.

To prepare the chorizo at home you need lean pork such as pork shoulder or head, pancetta or pork fat, salt, pepper (can be sweet such as paprika, with a third of spicy such as cayenne pepper, or half and half, to taste), garlic and sausage casings. The first thing you need to do when making chorizo is mix the meat thoroughly together with the fat; you must bear in mind that the meat to make chorizo needs to be below 4ºC so the consistency is firm and you are able to cut it with a knife; it should also be checked that the temperature of the chorizo fat is between -2 º C and 2 º C to avoid melting during the mincing, it should be enough to leave the fat in the freezer for approximately 2 hours.

Secondly, when making the sausage at home, add some garlic, previously crushed in a mortar, salt and paprika; you can also incorporate some water or a glass of dry anisette or anis to help to mix and bind everything in together and leaving the mixture as even as possible. The chorizo mix must be left to stand for 24 hours in a cool place, which is why it's advisable to cover the mixing bowl with cling film or cotton cloths and put it in the fridge until the following day; then, with the help of an 'embutidora' or just a funnel, fill the intestines with the marinated mixture, trying not to leave air pockets and then their are tied off at both ends with thick cotton string.

Finally, the chorizos must be pricked with a needle or a similar sharp pointed object to remove possible air pockets that could have formed and they are hung in a cool, dry and airy place leaving enough space between them that the air can reach the whole surface area and they will dry in three months; after this curing time the weight of the chorizo will have declined 20% of its original weight. 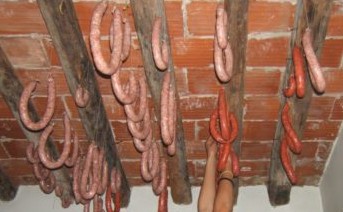 It is very important that the home-made longanizas and chorizos hang in a cool, ventilated area to cure.

It is important to have in mind that the chorizos as much as the longanizas that are made at home do not contain preservatives, therefore it is important to vigilate the curing of these sausages; we can take as a reference the ideal climate from the Sierra de Teruel, given that they are zones with low humidity and cold temperatures, conditions that are perfect for curing meats such as longaniza, chorizo and Spanish ham.

The meat industry dedicated to the production of sausage is one of the main economic resources in the food sector which has led to an increase in the required quality levels and, as a result, has become an excellent food very rooted in our tradition. Among the sausages that exist, cured sausages like chorizo and Aragonese longaniza are the ones with the most variants as their production can differ in the amount and type of spices used. New technological applications have allowed chorizo and longaniza to be available to all of the public, as in the case of the production of chorizos and longanizas that are low in calories or sodium for those whose diets require little salt or fat content.