The first Serrano ham that was supported by a Denomination of Origin in Spain was Teruel ham. The main objective of the Denomination of Origin from Teruel is that the customers eat a good high quality ham, which has been subjected to a very strict selection and curation process. It also contributes to the development in the province and even more so in the pig sector. The cold and dry climate in the high zones of the province of Teruel has allowed us to obtain high quality Serrano hams. Nowadays the main economic sources in Teruel are the pig sector and argiculture.

In 1981 the first movements began to obtain the denomination of origin "Teruel ham". But it was 1985 when it was actually ratified by the Ministry of Agriculture after the passing of regulations in 1984 by the Concierge of Agriculture, Government of Aragón. Today, there are 120 farms inscribed in the Denomination of Origin for Teruel ham, with a capacity of 120,000 animals per year. There are 6,900 mother pigs, 43 dryers and 10 slaughterhouses in this province alone.

The pigs suitable for the production of Teruel hams with D.O come from the cross-breeding of Landrace or Large White pigs in the mother line and Duroc in the father line. In addition, they must be fed with controlled natural feed. They have to be slaughtered when they are about 8 or 9 months old and they must weigh between 110 and 130 kilos. And in the last 40 days of the animals life they are not allowed to eat much protein.

The external characteristics of the Teruel hams with D.O are: an elongated form, conserving the hoof and the crust. Also the Teruel ham with D.O has a mark of identification that is burnt into the crust; an star with eight points. It also has a band with the number and logo of the Control Board. 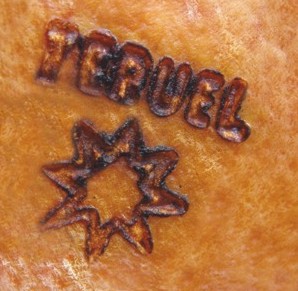 Identification label of Denomination of Origin from Teruel.

The D.O of Teruel ham is included in the foodstuffs protected by the European Union, due to its having been made in specific geographical areas and also under rigorous quality conditions.

The European Commission has approved a list of 318 high quality products in which Teruel ham features along with 36 other Spanish products.

Teruel ham is better protected with the D.O, which ensures its distribution throughout the European market. This all serves to improve the prospective future of Teruel ham with D.O, which will also help to increase the production of hams and boost its sales on the market.