The "Denomination of Origin" (similar to what we would call a brand name) ham from Teruel was the first that was created in Spain, guarunteeing the high quality of Serrano ham from Teruel. There is a regulation that maintains that the areas for the curing of these hams are only to be found on the land in this province that exceeds 800 metres above sea level, however the making of these hams is distributed thorughout the province. The control board of the "Denomination of Origin" (D.O.) from Teruel established as a prerequisite that the hams were to be made in these areas because in these zones of Teruel the climate was dry, hard and with icy winds which is deal for the perfect drying of the ham. Ham from Teruel with D.O. provides a meat with a lot of protein, little salt, vitamins and a low level of cholesterol which is made by combining the artisan tradition with other control methods and modern developments, even though the drying always takes place in natural dryers that, as we have said, must be dryers situated at a minimum altitude of 800 metres and situated far from any type of contamination.

The legs of ham from Teruel, also known as "perniles" come from a breed of pig that results from the crossing of Duroc pigs from the paternal line and Large White from the maternal line. To achieve certification from the control board in the making of ham with D.O. the pigs used to make the ham must have been born and reared in Teruel farms and it also involves a thorough investigation to ensure that the pigs are not medicated during the 15 days prior to their slaughter. The pigs destined for the production of Teruel ham have to be a minimum of 8 months of age and the minimum weight must be between 115-130 kg; other requirements to obtain the certification D.O. in hams from Teruel are to control the feeding of the pigs according to regulations set by the control board in the 40 days prior to their slaughter, that the male pigs are castrated before entering the feedlot and that the females are not on heat at the moment of the sacrifice. Once the animals are in the slaughter house they stay there for a minimum of 12 hours during which time they must not be fed they are given only sugar in water which ensures an appropriate level of sugar in their muscles and helps to eliminate the exhaustion of the animals from being transported. 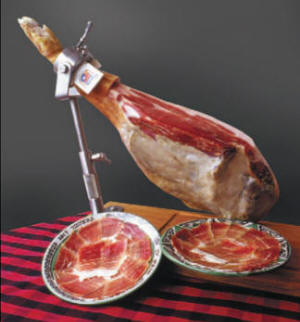 For the making of Teruel hams, the only parts used from the animals, are those with a fat layer of 4-7 cm in thickness at the height of the fourth rib. Each leg of ham with D.O. from Teruel must be cooled to between -2 º C and 2 º C and the minimum weight should be 115 kg. fresh, which will determine the length of its salting period, thereby a mark is placed with the password MAPA, week and year of the start of salting and then transported to the dryers in refrigerators. The salting stage of the Teruel ham lasts a maximum of 14 days to which is added a settling period of 45 to 90 days in chambers where the temperature is controlled (from 3-6 degrees) and also the humidity of the air (from 80-90%). After this, the drying stage begins with the transportation of the hams to a natural dryer that has windows that regulate the temperature and humidity and the hams remain there from 6 to 9 months, some of these dryers have control equipment to ensure that the temperature is between 15 º C and 20 º C and humidity conditions are optimum.

The drying process of Serrano ham from Teruel is one of the most important phases in the making of this product, given that during this phase the ham continues to dehydrate and also it 'sweats' which consists in the natural fusion of the fats in the crust and their even distribution within the muscle which gives the ham its characteristic aroma and flavour. After this drying phase, the legs of ham are transported to maturation cellars where they are stored hanging with the necessary humidity and temperature to complete the curing process which will have a minimum duration of 12 months. Its at this point that the suppliers from the control board of the Designation of Origin check one by one the legs of ham and identify those that are suitable for the Denomination of Origin, thus the ham with the Designation of Origin from Teruel get their logos branded with the eight-pointed star next to the name of Teruel and crowned with a numbered band with the logo of the Control Board. 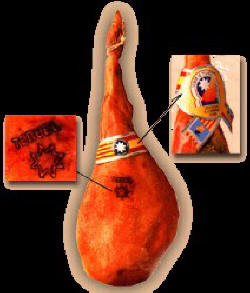 Distinctive identification of Teruel ham with Designation of Origin

Most commonly they sell the whole leg of ham, but there are more and more stores that sell Teruel ham already sliced and vacuum packed. Designation of Origin Teruel Ham may be found as sliced ham, boneless ham and bits of ham vacuum packaged, but this must take into account two important factors: First, its handling must meet the specifications laid down in the techno-sanitary regulations, and secondly, its control by the Control Board is especially important because in the manipulation of hams to produce the different formats they lose their identity and only those that have been vetted may place the printed name of Teruel ham on their containers and label them with the logo of the Control Board that identifies the quality of cured ham from Teruel with Designation of Origin.

Cured Serrano ham from Teruel is called 'Serrano' ham because it comes from white pigs reared in the mountains or the highlands and not from Iberian pigs fed primarily on composite foods. Sometimes a few small white granules created by crystallization of thyroxine appear in the ham, which is because it is a product of long-term curing that has amino acids, in fact they also tend to appear in some cheeses, but in no way do they affect the final quality of the product; other times a white veil formed by thyroxine may appear, whose appearance is due to the slow maturation of ham or curing with a little salt, this does not imply any degradation or premature expiration of the ham and it is enough just to remove the area with a superficial cut; if there is a darkening of the surface it is due to oxidation, which is avoidable by protecting the ham with plastic and keeping it in a room at a low temperature and with some moisture in the air; the last phenomenon that can occur is the presence of metallic colors in some areas, that occur in perishable animal products, but their appearance does not represent any change in the ham.

Teruel ham is a ham with a natural aroma and flavor that is enjoyed best when freshly cut into very thin slices at room temperature; of the fats that it contains only 37% of them are saturated fat and the remaining 63% are unsaturated fats that encourage the emergence of so-called "good" cholesterol, D.O. ham from Teruel also has a very low salt content; also it provides a large quantity of vitamin B, minerals and amino acids. Designation of Origin Teruel Ham is recognized externally by its elongated form and from being rounded at the edges, the hoof is left in place and it either has its entire crust or it is cut into the shape of a V (see below). If you observe a slice cut from Serrano ham it has a bright, intense red color which shows clear streaks of  intramuscular fat, whilst the fat next to the crust is a yellowish white, aromatic and with a pleasant taste. 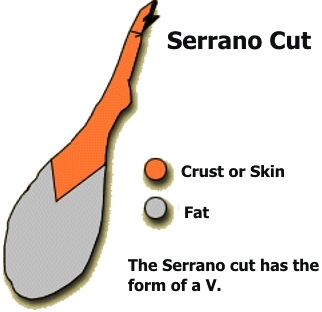