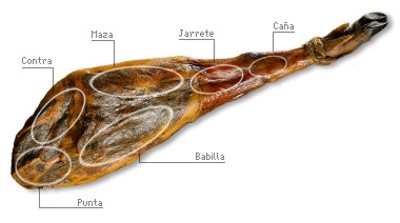 Teruel ham where we can see the different parts

La maza: Is the part where ham has more meat, is the main part of the ham, the richest and juicy, and contains more quantity of loin.

La contramaza: is the opposite part to the maza, is the narrowest part of the ham and therefore the most cured,  is the part that contains less proportion of fat.

La babilla: is the part delimited between the femur bone and the coxal, for this, it contains less meat than the part of the maza. Is recommended to start cutting ham in this part in order to preserve and to take advantage of ham piece.

La punta o hip: is the opposite part of the hoof. Is one of the more tasty parts of ham, together with the maza so this part has a lot of fat.

El jarrete: this part of the ham is located between the tibia and fibula, normally is used to make small cubes , this meat is harder and fibrous with different flavours.

La caña: has the same texture and flavour characteristics that the jarrete. this part of the ham is normally used in gastronomy to make small cubes.