Cured ham has been substituted, in the last few years, by other gifts that travel agencies or banks use to give to their clients in order to contract a holiday or get customers to transfer their money to that branch; this is just one of the examples that show the slump of the ham sector among the consequences that has caused the global crisis in recent years. In this area of cured ham and other meat products from pigs, the crisis began with Iberic ham, however the crisis has produced a domino effect which means that ultimately it's the farmer who ends up worse off. Everything started between 2000-2007 when lots of businessmen began to invest in the Iberic ham business, including rearing their own animals, so much so that the production of pig products amplified even to the point of supermarkets launching white brands of iberic ham and sausages etc. made from pigs fed in feeding lots and not even in the pastures. With the arrival of the world crisis in the 21st century the banks are beginning to consider the pig sector at risk, therefore they have stopped giving loans and caused the prices of Iberic ham to fall. In addition, the spending power of the average family has also decreased, meaning that now they must omit buying certain products that they consider 'luxurious' and instead they buy things that are more economical. This means that the next domino falls too: serrano ham with Denomination of Origin from Teruel. Given that the price of Iberic ham is dropping, the consumers of Teruel ham will switch to buying Iberic ham and the consumers of Iberic ham start to change to other, more economic, hams. 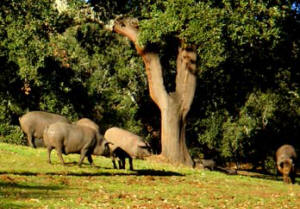 Added to this domino effect is also the fact that with the prices and the sales falling more and more, eventually they will get to the point in which the sector will enter into crisis as well. During the Christmas period, they look for methods of increasing sales and in the face of having to lower the prices even more, they are trying to get public institutions to promote pig products and through this, raise the pig sector.

We need to bear in mind that the quality of the Iberic hams can differ: recebo ham (made from pigs that are fed only acorns up to shortly before their slaughter; then they are fed special high quality feed), cebo ham (made from pigs that are fed only cereals and feed) and bellota ham (made from pigs that are fed only acorns), are governed by European legislation and the Iberic 'bellota' ham with Denomination of Origin whose fattening and curing time together is two and a half years longer, at least, than any of the others. The main difference between these hams lies in the quality of the product and therefore also in its price, however the lack of knowledge in these differences in quality means that the consumers tend to choose ham based simply on its price, forcing the producers of Iberic ham, in turn, to reduce the original prices of their hams and in doing so, they lose money. 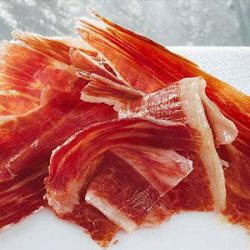 Slices of Teruel ham with D.O.

One of the threats that Teruel ham with Denomination of Origin faces is due to Iberic ham. As we have mentioned above, Iberic ham suffers from mass production and a large fall in its prices and because of this it automatically enters into the market of Teruel ham in spite of the fact that it is of higher quality. Serrano ham from Teruel with Denomination of Origin has been through very difficult times during the crisis, and it was believed that with the amount of other hams on the market sales could drop, however the Christmas season of 2009 was as dramatic as it seemed it was going to be, the sales being somewhat inferior but basically similar to the sale from in 2008, which shows that Teruel ham has been able to maintain its position in the market. Teruel ham production is the Denomination of Origin brand that makes the most legs of ham and the only one in the Mediterranean that controls its production from its origin, in other words, from when they begin rearing the animals. Also, the Control Board maintain strict standards regarding the characteristics that a ham of this Denomination of Origin must have; it must be very carefully produced from the beginning, contain just the right amount of salt, weigh at least 7 kilos etc. In fact, not all of the legs of ham produced in Teruel are granted the Denomination of Origin, only one in every four achieve the D.O and this is recognised throughout the area as star stamped in the ham and a band with a corresponding number of the Contol Board of Denomination.