Teruel ham is a food present in many homes all over Spain. However, we do not always know how to cut, present or even keep Teruel ham, factors which are very important for the enjoyment of its flavours and properties. Such is the importance of cutting a ham well that even its flavour can become spoilt if carried out by inexperienced hands. The key is to have the appropriate tools andknow a few secrets to get the most out of your ham.

The tools necessary for cutting Teruel ham are, firstly, a stand (as featured below) where we can support the ham and varios types of knives: a long, flexible knife with a thin and very well sharpened blade to cut slices. The second knife would be short and rigid to separate the meat from the bone and to peel back skin or fat.  The sharpener helps us to maintain the blades in a perfect state so that we can assure a clean cut, it is important to always sharpen the knives before cutting the ham. 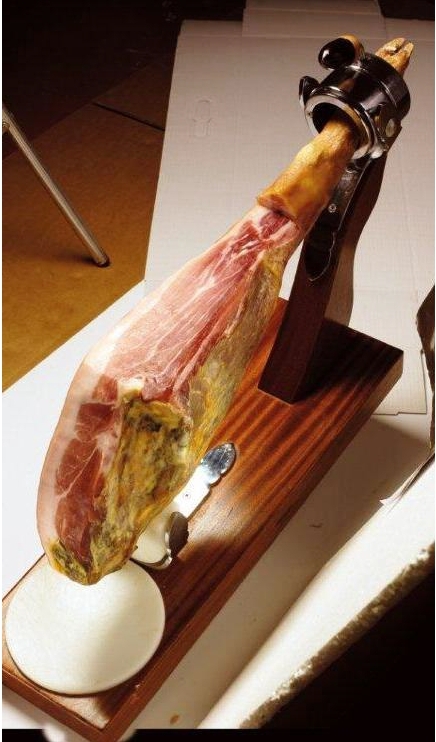 To begin with, before cutting the ham, we need to make sure that we remove the band or lable and the packaging and  place the ham in the stand. There are two ways of placing it depending on how we are going to eat it; by the main hub or by the flank, normally the ham is placed by the hub if we intend to consume the ham in a short amount of time (a maximum of 2 days) or it is placed by the flank, the narrowest part of the ham, which is for a slower consumption as this way we avoid the drying out of the ham.

Once well fixed in the stand, we peel back the rind of the ham before making a circular cut around the shank, which will help us to cut better slices of ham. Then we take off the skin and thesuperficial fat and clean the cut, so that the slices will be ready to serve. When cutting the ham, we must ensure that the slices are very thin, almost shavings, leaving in the ham parallel and regular cuts we will have a flat surface without grooves or holes. It is important to make the surfaces straight and to skirt the bone so that you have easy access to the zones around it. To finish, cut off the ham stuck to the bone that can not be sliced into pieces and irregular strips, which will be excellent as an aperitif in the form of cubes. The bones can be used to give flavour to stocks, soups and stews.

Once having cut the ham to the best of our ability, we then place the slices on a plate, in one single layer, overlapping the slices to avoid them drying out and to retain the colour of the ham. The slices should have a shiny appearance due to the fat on the surface. It is very important that you do not leave the ham in the fridge up until the moment of its consumption, it should not be eaten cold as it loses its flavour, therefore it is recommendable that the ham is consumed at room temperature.

Last but not least is the preservation of Teruel ham, the packaging in which the ham comes in, as we have said, is discarded. We must therefore seek an alternative packaging for when the ham is not being cut, that reatins its freshness and prevents it from drying out. A simple cotton cloth is sufficient. Once you have finished cutting the ham you need to cover the cut surface of the ham with its own fat, the fat that we removed before beginning to cut the ham, and then cover it with the cotton cloth. Under no circumstances should you use plastic or foil or original packaging to cover the ham. Nor should it be stored in the refrigerator. The ham should be at room temperature of between 23 and 25 degrees, so you should keep it the same stand in a cool, dry place. If, after time, mites start to appear you have to clean the ham with a clean, damp cloth and then, with another cotton cloth, apply extra virgin olive oil to the surface.

Some tips for cutting and storing Teruel ham:

- When you've finished cutting the ham, protect the area which some thick pieces of fat or crust, taken off when you first begin to cut the ham, so that the grease on the surface is forever kept fresh.

-  It is important to calculate the ham that we're going to need so as not to cut too much. At the same time it is important that the ham is cut just before serving. You should never cut more ham than is going to be eaten and it should be cut just before it is served. As for the layout, the slices are placed in a single layer in all cases, with a slight overlap between them. 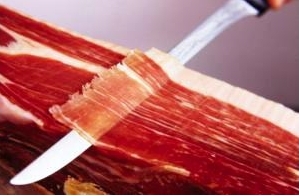 -  If you have been given or acquired a ham and you believe that you will not eat it for a while, it is advisable to remove it from its packaging and store it at the recommended temperature insidea cotton bag, or you can wrap it with a dry cloth of the same material.