The first step to give in the cut of Teruel ham mountain is its correct positioning, we must locate it in the cut table, with the hoof upwards. If we cut in a warm site, as for example the kitchen to it, will be far better since the vein will loosen its juice. Once placed cured ham we will initiate the cut. If we are going it to consume in a single day we will clean to all the crust and the outer bacon, if we are going to take more time in consuming it it is cleaned to measurement that is cut.

In both cases, as much if we are going it to consume soon or to take more, ham has to always have the clean and or well formed edge, to avoid bad flavors or unnecessary crusts. In order to make a good cut to Spanish ham three types of knives can be used: one extended with narrow and flexible leaf that will be the ham knife (for the extraction of parts), a other short and strong (for when it is arrived at the cut of the hip), and knife of wide leaf (for the preparation and cleaning of ham) 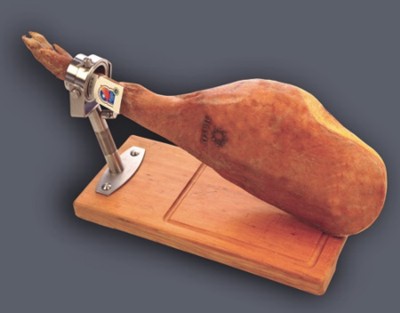 Once clean ham, cleared the crust and the outer bacon, occurs a deep cut in the cane with the knife of wide leaf. From the jamonero knife is used here, extracting lonchas of the mace, that is the richest part and jugosa. Althought we will happen to cut the part of the hip, that is made with the short and strong knife. We will nail the end of the knife doing an incisive cut and will cut around the bone, therefore lonchas will leave cleanings. The meat that is beaten to the bone can use to make small strips of jamón, that serve as complement as stews or plates, or to remove parts.

Soon we will continue cutting by the part of contramaza until arriving at the bone. Once finished the return occurs him ham  and we will cut the stifle. Of the part of jarrete also it is possible to be extracted of little parts. 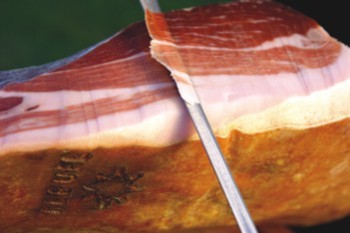 We must cut ham finest possible, the cut must be uniform, of above downwards or vice versa and that includes all the wide one of ham. If the pieces take fat they will be much more substantial. The blade of the knife never must watch towards us. At the time of presenting/displaying ham in the plate we must place the ham in a single layer, or slightly mounted. The ham we do not have to eat it cold, since it loses taste, reason why do not have to keep it in the refrigerator. An advice to improve the flavor of ham is to temper the plate with a little hot water

In case we let cut cured ham, we must protect placing it some heavy bacon piece and crust, removed from the principle, thus will maintain the fat superficial fresh good