There is no specific detailed rule for cutting ham, however guidelines can be given to follow to make the cut better and more comfortable. The person who cuts a Teruel ham with 'Denomination of Origin' (like a brand name that ensures a high quality ham) always tries to achieve a good cut of ham and provide a high quality product selected specifically for their characteristics, since wherever there is a party, there is a good ham and the person in charge of slicing has the responsibility to ensure that each slice has the right texture and the characteristic color of a good ham from Teruel so that its aroma and flavor can be enjoyed with each cut. A very important aspect in achieveing a cut of ham as perfect as possible is the use of a good knife and a premium ham, Teruel ham with D.O. being a safe bet for a spectacular tasting Serrano ham.

Serrano ham comes from white pig breeds and the label of "serrano" (highland) is determined by the terrain in which it is cured, as Serrano ham is made in mountainous areas with a cold and dry climate.  According to the curation, they can be called: Pantry ham, whose curation ranges from 9 to 12 months; Reserve ham, which is cured for between 9 and 15 months; and Extra Reserve ham, whose curation period exceeds 15 months. Specifically the Teruel ham is made in areas with a minimum altitude of 800 metres with a minimum period of maturation and curation of a year.

The first thing we must do is chose a good ham. Look for a leg of ham that best fits your needs i.e. if you are having a celebration and catering for a lot of people then a large ham is recommendable, but if not a large ham will dry out in 1-2 weeks, so best to buy one more suitable for home consumption. Once we have found a suitable ham we must ensure that we acquire it in its best time of consumption as ham, like wine, has its optimum moment and once it passes its qualities start to decline. Although the best Serrano ham is always that which is eaten freshly cut, the selection process means that we have to focus on the origin, the brand, the commence date of curing, the texture of the fat, the weight of the piece, ankle thickness, mold, etc... If you do not have the tools necessary to cut a good ham, it's best to get yourself a firm ham stand with a good grip and a spike that grips the end of the hub at the bottom of the ham so that it won't move with the movements of the knife; you will need two knives: a short, strong one to de-bone and another long, flexible one to cut the slices of ham; last of all it will also be necessary to have a sharpener to keep the ham knives sharp at all times.

Hams have different parts that we should know about before we launch into cutting one: the most well-known part is called the 'maza' and it's the area of the ham with the most meat; other areas are the hip or 'punta' which is the part at the end of the ham where the leg bone ends also; the area opposite the maza is the 'babilla' or 'contra-maza' and lastly, the area closest to the trotter is called the 'codillo'. 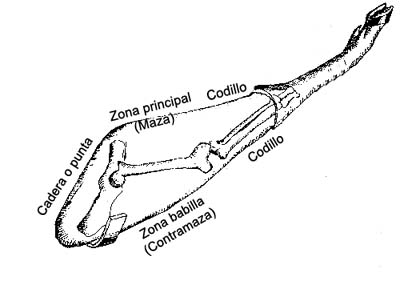 We should know the parts of Serrano ham before starting to cut it.

Once you have the ham ready to cut, the first thing to do is remove all the packaging such as the string and seals etc so that they don't get in the way and hinder your cutting of the ham. You have to make a deep cut and the vertical height of the shank with the short knife so that it reaches to the bone. Here you take off the crust and tough parts of the ham with the short knife and leave them aside as they can be used for cooking, to add flavour to many different dishes. If the whole ham is going to be used in one go you need to clean the whole thing thoroughly, but if the consumption of ham will be progressive, only clean the area you're going to cut in order to prevent drying.

The Serrano ham has to be placed correctly on the cutting board with the hoof facing upwards if the ham is going to be eaten all in one go, but if it's going to be consumed over several days it is preferable to place it with the hoof facing downwards so that we start by eating the 'barilla', the part that dries the quickest. If the place where the ham is cut is a warm place, like a kitchen, the intramuscular fat melts and softens to facilitate the cut and also provides a delicious sparkle to the slices. Then begin to cut slices of ham as thinly as possible, with maximum size of the palm of the hand, the movements to be performed for this are similar to those made when playing a violin...it's not necessary to exert force, the blade of the knife should not bend and you have to try to cut the ham straight, parallel to the main bone or ham stand/board. The ham slices should try to encompass the entire width of the piece of ham and contain some fat, so they are much more juicy. Then, to present them on the plate, the slices of ham should be placed in a single layer and, if possible, on a warm plate so that the ham does not lose its flavor when it cools. This is the reason why ham should never be stored in the refrigerator and must be eaten at room temperature.

As you go cutting the 'maza' of the ham, there will come a point where the knife hits the hip bone, then with the short knife, make an incisive cut around the bone, so that you can continue slicing the 'maza' and the slices of ham can come out cleanly. As the hip bone will carry on appearing through the ham, with the help of the short knife we have to keep separating the meat from the bone; this way we can also maintain the cut straight and continuous form both areas ('maza' and hip) parallel to the ham stand. On finishing all of this area, you need to turn the ham over and fix it firmly back into the ham stand, continuing with the 'babilla' until you arrive at the bone again. 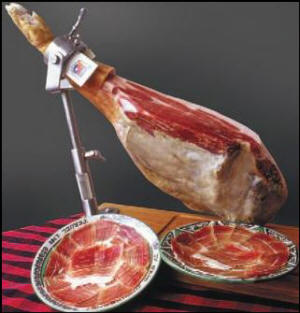 Teruel ham with 'Denomination of Origin' is a delicious dish

In the case of not cutting the entire ham, we use a slice of fat from the very same ham to cover the area exposed after cutting until the next time, this is to prevent the ham from drying out. The meat that remains stuck to the bone can be used to make small strips of ham that can be added to stews or small 'taquitos' (like diced ham), that can add flavour to things, which can also be taken from the 'codillo' the part nearest to the trotter. Sometimes, when cutting the ham, small white spots can be seen which have hardly any flavour, which are tyrosine crystals that come from the amino acids in the meat; a natural process that does not indicate any loss of quality but is a nutritional element of the meat in itself. To make the slices of ham, the most suitable temperature is between 25 º C and 26 º C, while the most suitable temperature for its storage is 16 º C. To preserve the leg of ham that hasn't yet been eaten you should cover the area of exposed meat with the fat of the very same leg of ham and then place a cotton cloth over the area and keep the ham in a dry, fresh, well ventilated place trying to avoid hot spots and sudden changes in temperature.

A good Serrano ham, especailly the Teruel ham, is a party for the senses, given that it possesses an aroma, flavour, colour and texture in the mouth that is difficult to describe, with a soft salting that is aprreciated better through a good cut of ham. The acquired experience in the handling of the knife menas that little by little the consumer can enjoy this delicacy more and more.