It was Homer who named olive oil as "liquid gold. "

The Code of Hammurabi which dates back to 2,500 BC speaks of using Olive Oil to regulate their trade.

In classical Greece, the olive oil transportation was secured by a fleet of "oil ships. "

In many cases, the Romans ordered the payment of taxes from conquered populations in the form of olive oil.

The ancient Roman olive oil was classified into five grades: "oleum ex albis ulivis" from the milling of olives. "oleum viride" from olives picked in the later stage of maturation, "oleum maturum" from very ripe olives,  "oleum caducum" from olives found on the the ground and "oleum cibarium" from almost rotten olives, this last kind of oil was used to feed the slaves.

From 1264, in the Tower Room (Les Garrigues, Lleida) -a sort of fortified farm, which depended on the castle master Gardeny (in Lérida)- the Templars who dealt with oil production, obtained it from Arbequina olives, a variety that was brought from the Holy Land by the same Knights of the Order of the Temple.

The olive tree Fuente Buena, is widely known for its long-life and it is found in Beas de Segura, Jaén. Originally, this tree had two feet but now these only count as one of seven branches. It's 9 metres high, 3.5 meters in diameter at the base of the trunk, 4.10 mts. in perimeter at the top of the trunk and 260 cubic metres in volume of branches. In the early nineteenth century its production was around 850 kilos. Although its origin is unknown, the locals claim that the olive branch that gave rise to this tree was blessed on a Palm Sunday.

The olive oil denomination of origin comprises of a wide spread of Mágina, located in Jaén, with 61,000 hectares of olive trees that produce an average output of 25,000 metric tons of oil.

The denomination of origin covers fewer acres of Siurana Tarragona, with an average production of 3,700 metric tons and an extension of 13,176 hectares. 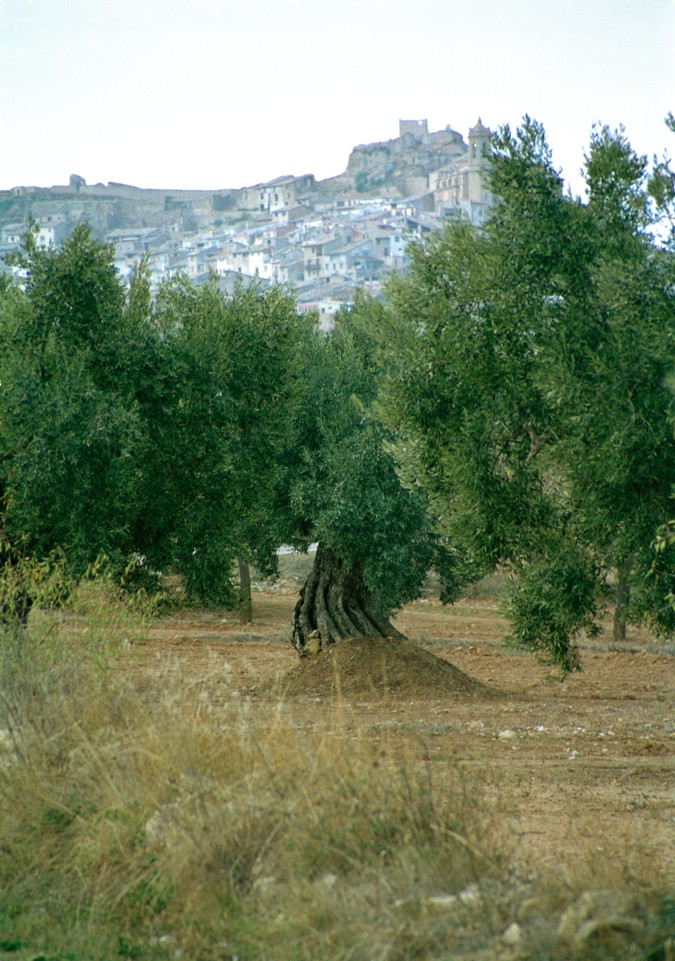 The olive tree has been cultivated since ancient times, due to their extensive properties beneficial for our health.

The degree of acidity indicates the amount of free fatty acids without justifying a better or worse nutritional quality.

Repeated use of olive oil ruins it.

The repeated reuse of  frying oils (4 or 5 times) results in significant oxidation.

Frying alters the composition of the oil.

It is beneficial to use only olive oil for frying and for raw use i.e. dressing salads etc.

Olives have a high caloric value. According to their dressing, they are between 135 and 200 kcal. per 100 grams, which is still much lower than other snacks.

The performance of olive oil is of high quality both cold and hot.

The performance of olive oil is higher than that of other vegetable fats, both cold and hot.

Olive oil is an indisputable source of flavor.

When we use olive oil for frying, we should use a deep frying pan, because olive oil increases in size when heated, so this way we avoid spattering.

When we fry fish, we need to coat it in a thin layer of flour and place in hot oil and without moving it much.

When cooking pasta, so as to make sure it doesn't stick, add a little olive oil to water while the pasta is cooking.