Trevélez ham is from Alpujarra, Granada and extends to the south of Sierra Nevada, Sierra de Lújar and Sierra de Gador up to the Mediterranean sea. In 1962, these hams were awarded the royal seal by Elizabeth II in recognition of its high quality. 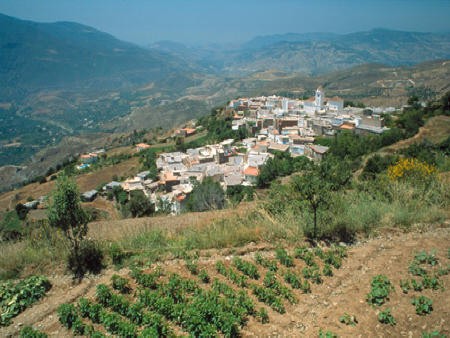 In Alpujarra, Granada is approximately 1,200 metres above sea level, therefore it has favourable conditions for the making of ham.

- Geographic zone: the areas where the ham is made are those that are 1.200 metres above sea level. These places belong to the province of Granada, they include: Trevélez, Pórtugos, Capileira, La Tahá, Juviles, Bérchules, Busquistar and Bubión.

- Climate: as these areas are at 1.200 metres of altitude, the climate in these areas, with cool fresh winds and and a good level of humidity, favours the coservation, drying and curing of the hams; as well as enabling the development of idigenous microbiological cultures. The temperatures in the winter are very cold and in the summer, very hot.

- Classification: The breeds of pigs that are used to make Trevélez ham are: Landrace, Large-White and Duroc-Jersey or crosses of both. The hams have to come from females or from males that have been castrated. When the legs of ham are fresh, they must weigh at least 11.3 kilograms.

- Production:  once the pig has been slaughtered, the ham has to go through a number of phases: salting, washing, curing and maturation.

The salting consists in covering the ham in sea salt, for how long will depend on the size of the ham. Then they are washed, to remove all of the salt that has stuck to the outside of the ham. Once the leg of ham is clean, it goes through a curing phrase, where the hams are taken to natural dryers for an average of 6 to 7 months. Anf to finish, it goes through a phase of maturation, where the pieces are taken to cellars, in which their must be moisture and a constant temperature. This phase lasts between 14 and 24 months. Nitric preservatives are not used during the maturation and a small amount of salt is used.

- It's shape is elongated and slightly oval.

- The hoof (shiny black) and the skin is kept on the leg of ham.

- When we cut the meat you can see that the ham is streaked with fat (the source of flavour and a sign of a high-quality ham).

- To make it different from the others, Trevélez ham carries a specific stamp and band (the stamp issued by the Control Board).