For the making of Serrano ham, different methods can be used. The oldest method is that in which the piece is cut from the pig and then squeezed dry of blood. In order to achieve this they place a lot of weight on top of the pieces of ham and they leave them lying on a clean, hard surface for a few days so that the meat loses its moisture.

Later the hams are passed on to the salting room, where they are placed alongside each other and salt is added until it covers the hams. Then they place another layer of hams on top of the first and cover with salt again. Then they are left for a period of time which is always less than 14 days. The hams from the bottom are exchanged for the hams at the top and vice versa and more salt is added if they see that the hams are not properly covered. 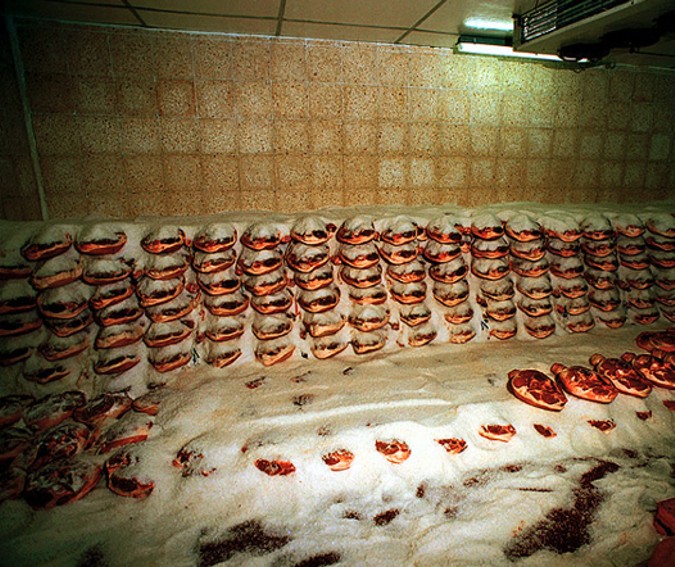 Salting room for the Serrano ham.

The whole process is intimately guided by a ham expert, who is responsible for controlling the duration of the various stages through which the hams pass for proper development.

Once the Serrano ham is removed from the salting room it passes a post-salting process which consists in nothing more than removing all of the salt from around the ham, which is found on the surface; the inside contains practically no salt at all. In this post-salting period the salt concentration of the ham tends to equalise, this process takes between 45 and 90 days. Then, they continue to eliminate the salt through washing the hams with warm water and rubbing them down with brushes to remove whatever's left.  In this period, the ham must be at a relative humiditybetween 80 and 90% and a temperature between 3 and 6 º C.

After this stage, the Serrano ham passes through the curing room, in dryers from the province of Teruel with an average height of more than 800 metres. During this period of curing, the ham develops with time the aroma and flavour of high-quality ham. Teruel ham is in the drying stage for a minimum period of 6 months with the total maturing time of 14 months from the beginning of the process. During the whole process the Teruel ham is subjected to a minimum of two  analyses, analising the salinity and moisture.

Ham curing room; this ham from Teruel remains in this room for at least six months