Formerly, most families tended small gardens and raised animals as a traditional form of food, as it allowed families to save money for other needs. In each house, the normal things to own were hens that provided eggs and meat, a pig which was raised throughout the year on the leftovers from the family members, and things that they could grow in the garden such as potatoes, vegetables etc. The pig was sacrificed just before winter, the main problem that existed was the manner in which to preserve the pig meat so that they could continue to eat it throughout the year without it going off. The solution to this problem appeared with the salting and curing of the meat. At first the whole pig was cured, but little by little other preserves were used which meant that salting became an exclusive method for the making of Serrano ham which has become one of the most popular dishes; among the Serrano hams those made in Teruel stand out as they obtained one of the first "Denominaciones de Origen" (which is similar to what we would call a brand name), which in Spain the main indication of exceptional quality.

The techniques for making ham have been modified today with the introduction of machinery and devices that control temperature, ventilation, oxygenation and the whole process of curing the Serrano ham, therefore the process changed from being a traditional production of a cured ham at home, into an industrial production of large quantities of hams. But in the small villages in Teruel you can still see the pig's slaughter. Nowadays it is difficult to find a home in which they continue to perform traditional basic stages to prepare Serrano ham and sausages like chorizo or traditional sausage; however if you would like to try the curing process of Serrano ham at home me propose that you use the recipe used during generations and generations in the Teruel province, home to one of the best Serrano hams worldwide. The hams that are made in the villages of Teruel have a traditional recipe for their preparation.

The making process of Serrano ham from Teruel at home begins by acquiring a fresh piece of ham from a good quality pig, like the pigs reared in Teruel; on buying the ham ask them to prepare it for you to cure at home, this way they will cut the ham for you with a rounded shape at a height of about 5 cm. below the leg bone and remove surplus items such as excess fat, cartilage, nerves and veins that are found close to the bone. It's recommendable that the piece of ham weighs around about 9 kilos fresh seeing as once cured the weight of the ham will have reduced to 35% of the original weight.

Once at home, the most important thing to do is remove the blood from the veins of the ham, especially the veins found next to the bone, to avoid the ham rotting; the method used for this is applying pressure firmly with your fingers on the ham, covering it first with a cotton cloth and concentrating especially on the in the area from the center toward the tip of the ham. As the last dregs of blood are extracted, dry the piece of ham with the help of a clean cloth or kitchen paper. Now the ham must be salted; apply coarse salt and rub energetically around the bone and all of the areas where the meat is visible. It is only necessary to coat the area of skin or hide in salt  if the weather is adverse and not conducive to proper curing ham, that is to say,  in areas with a similar climate to that of Teruel with temperature and altitude above sea level it is enough to simply apply the salt on the hind leg, bone and the meat. 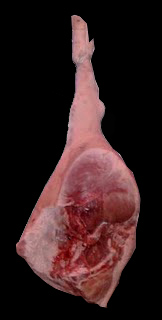 The climate of Teruel and the quality of the pigs make ham from Teruel one of the world's best.

Next, you need to place the piece of ham face down on a hard surface and on top of the skin of the ham, put a wooden board with 15 or 20 kilos of weight on top; leave the ham in this state for 2-3 days at a temperature of 12-15ºC; it would be a good idea to cover the ham with a clean cotton cloth during this phase to ensure that it is protected from all kinds of insects. This phase is important, given that salt is like a natural preservative it menas that the meat on the ham leg maintains its properties and doesn't spoil, also it helps with the bleeding of the ham, helping in turn with the drying process making this stage one of the most important of the whole process, therefore it is necessary to keep an eye on the. After 2-3 days, we exert pressure on the ham firmly with our fingers again to make sure that there is no blood left in the ham, if it was done properly the first time there won't be much left to remove; afterwards make sure that the ham is dry again and apply more coarse salt, but this time completely cover the leg of ham in it, replace the wooden board with the weights on top and leave it to stand. Let the ham stand at a temperature of 13-14ºC for a period of 14 days; however if the temperature is lower you must lengthen the time period to between 16 and 20 days; the only thing you need to bear in mind is that in the middle of this time period (whether it be after 7, 8, 9 or 10 days) you need to turn the leg of ham over so the meat is facing upwards.

After you've finished the salting period, be sure to remove the salt from the ham with a brush; unlike in the industrial process it's actaully better to remove the salt with the use of a brush as opposed to washing it off as they do in mass production, because the water aremoves the natural preservative of the salt that can lead to the meat spoiling. In fact, formerly in Teruel it was enough just to tap the ham sharply which allowed the excess salt to fall. The last phrase that is carried out in the majority of villages in Teruel before hanging the ham up to dry, and that which is used in the making of homemade Serrano ham, consists in covering the areas around the bone and where the meat is visible in paprika; which in the industrial curing process of would replace the salt applied in the pre-salting stage. To cover the leg of ham in paprika its recommendable to use a colander or sieve, tap it through and it should sprinkle evenly; this spice is used so that the Serrano ham that is made at home can maitain the meat that is exposed in a good state and prevent it from spoiling or going moldy, however there's no need to worry about the taste, the paprika does not produce any alteration in the flavour of the Serrano ham once it has been cured.

The moment has now arrived top hang the ham for its final drying process. It's enough just to encircle the leg of ham with string or a strip of hard plastic, firmly enough so that it can hold the weight of the piece of ham during the curing period; the ham must stay for a minimum of 5 or 6 months in a fresh, well aired area with a humidity of 65-76% in which the ventilation will be constant and in turn be shielded from the presence of insects (it usually used to be kept in a cellar, barn or any cool room of the house). In Teruel, the climate is rather dry with a relatively low humidity: both these factors make, together with the geographic situation of many places (from 800 metres about sea level), great conditions for curing of Serrano ham, those that give it its great aroma and flavour. This has to be born in mind when you come to cure a ham at home, given that it is in these months when the Serrano ham acquires its organoleptic properties that we will enjoy with our guests this exquisite delicacy. The best time to make a ham is at the end of autumn and its optimum maturation is reached at the end of approximately 10 months of curing and maturation. 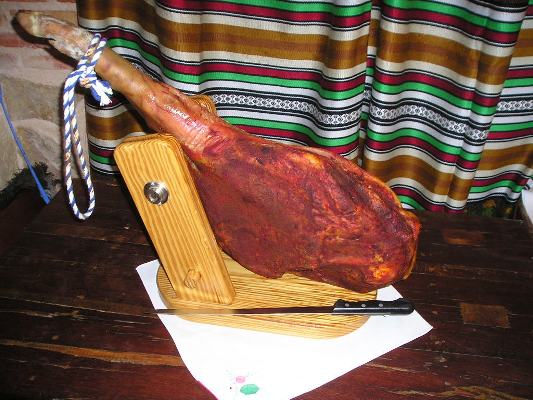 Serrano ham prepared at home as in the traditional recipe.

Up until few years ago, Serrano ham was made and cured at home alongside many other products taken from the pig sacrifice that took place at the beginning of the winter. Formerly this sacrifice was a made holiday, it was very important because so many pork products were eaten among which the most valued were the hams; which in the more humble families was used as payment for other things, whilst they themselves ate chorizo and other products that could be preserved in pickle. The artisan method for making hams at home is not always at odds with the new technology, given that in some cases personalised care cannot be given to each leg of ham in each stage of the process. The final result of a ham cured at home is very different to that of an industrially cured one because the legs of ham are salted and massaged individually applying the right amount to every leg of ham according to its weight.